Pens, Paper and Purpose: Will Evans and Sherrie Zantea Are Rewriting the Narrative for the Literary Arts in Dallas

Writing has been one of the central mediums of creativity for eons. Why is it then that the literary arts, as a discipline, feel estranged from everything we consider to be art? The lack of support for the literary arts in our city has resulted in a noteworthy deficit of places where writers can cultivate their craft and grow their career, but an even deeper issue lies in the fact that writers of color don’t often feel represented or accepted in what few spaces there are. According to Sherrie “Candy” Zantea, an Oak Cliff native and the author of Oak Cliff-Hangers: Stories in A Snow Globe, the lack of inclusion in the literary arts scene, specifically for black and brown writers, is driving valuable artists out of Dallas one by one.

“I teach brown and black kids, and as they get older and go to a local university and try to get into the literary arts – they realize it doesn’t look like them. They’re not the literary arts that the Dallas community supports. So, they go to New York and LA.”

The book was published by Dallas’ own Deep Vellum, helmed by local literary arts leader Will Evans. A couple of weeks ahead of TACA’s recent Silver Cup Award Luncheon, where Zantea performed a brand-new piece, we sat down with these kindred spirits of the literary arts scene to talk about the talent in our city, the obstacles that face them, and what it takes to launch a literary movement.

&: It’s clear the two of you have an interesting rapport. How did you meet?

W: I don’t know where we first met. In the bookstore, I assume. Or did we meet at an event in town? Sherrie has been a character in my life here in Dallas for as long as I can remember.

S: I was the program director for a youth writing organization, and I ran all the summer programs. Will’s outfit, Deep Vellum, was one of our big sponsors each year. So, the kids would go and engage in writing workshops at the bookstore, and Will was always there. That was about three or four years ago. And it’s been such a pleasure. Knowing Will and working with him has been so helpful.

W: You don’t have to be so complimentary.

S: Well, it helps when you can connect with someone like Will. He says things like, ‘Yes, use the space. What do you need from us?’ I planned these events summer after summer and that willingness from a sponsor makes an incredible difference. I’m just so honored that we could make publishing Oak Cliff-Hangers together happen.

W: It’s just the start. This is a chapbook. When we move on to a full book, we’ll have way more to share.

&: Is poetry one of the writing styles you plan to focus on at Deep Vellum?

W: Well, the literary community in Dallas is pretty small but it’s remarkably diverse. And I don’t mean just in terms of racial backgrounds. Everybody in town has a different style. When I moved to Dallas in 2013, my goal was to meet as many people as I could. Sherrie had been doing Dallas Poetry Slam around the time I opened up the bookstore, which housed our nonprofit publishing house.

&: Who initiated this opportunity to publish something together?

W: We just started publishing Dallas writers at Deep Vellum about a year and a half ago. Our first round of chapbooks, which is the term for a published work that’s a smaller piece of a larger whole – almost like putting out a seven-inch record as opposed to a full LP – gave us the chance to approach all of our favorite local poets, Sherrie being one of them. I think the poetry community in Dallas is the strongest literary scene that we have, so to work with her on this book has been a real pleasure. We’re cut from the same cloth. We’re a couple of doers.

&: Sherrie, do you work in any other styles as a writer?

S: I have in the past. I have a background in theater, and I’ve written six plays. Theater combines what I love about poetry, the words on the page, with the performative aspect of slam poetry. It’s just like a monologue, but it’s in a poetic voice. Maintaining a poetic voice is a huge priority to me because you don’t see voices like mine represented a lot in our community. So, I teach my peers and my colleagues and teens that you can do more than write, you can be a performance poet. I want to be that example for writers in Dallas because most of the time they just write a poem and walk away, they don’t understand that there’s an entire three-act play happening in between those lines.

&: Why do you like to collaborate with each other?

S: From the very first obstacle I faced, it was a simple phone call, and it was taken care of. I was born and raised in Dallas in the Oak Cliff area. Having grown up here seeing the limited resources and places that felt like home, because creatives need a home to do their work, I couldn’t help but think, ‘we need this.’ And when I say ‘we’, I mean black and brown poets. I think finding someone who has the same compulsion to get it done, someone who says, ‘Well, let’s bring those artists in. Let’s invite them to readings and events at no cost. Let’s make a community where someone can write a book about their own experiences and see it on store shelves,’ makes you feel like you’ve found someone you can make things happen with.

W: It means a lot to hear you say that. I’m not from here, so when I came to Dallas, I told everyone, ‘Hey, I’m starting a nonprofit publishing house in Dallas,’ and the response I got was shocking. You have a city in which arts are valued, but literature isn’t welcome? That’s what it’s all about. I saw an opportunity to take the idea that literature was underrepresented here in Dallas and elevate it. 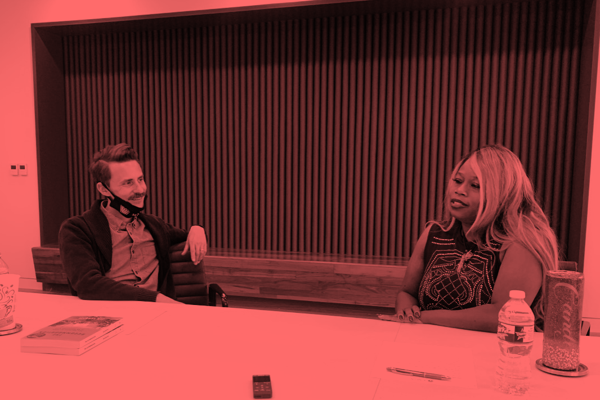 &: It feels like a kernel of that effort is what made this book such an urgent project for you both.

W: In the literature world, everything has been about New York for too long, right? It’s really hurt writers across the country. It is so much easier to get a story of a failed writer walking the streets of Manhattan than it is to get a coming-of-age story in Oak Cliff or anything like that. It does not mean that the stories of people in Oak Cliff or Plano are any less important than those in New York, but you have access to resources. I am confident the next Amanda Gorman is in Dallas right now. So, I ask, what are we going to do to create the first Dallas Poet Laureate position? We’ve never had one, and the poet laureate is way more than just a poet. It is a figure who brings together the entire spectrum of the literary arts with their own passions.

&: Why do you think Dallas readers need this book now?

S: The book is called Oak Cliff-Hangers: Stories in a Snow Globe, and the reason I wrote it is I teach brown and black kids all the time, and they aren’t using creative writing for social and emotional learning. We do these creative writing workshops and use poetry to get them to open up. But as they get older, and they go to a local university and try to get into the literary arts – they realize it doesn’t look like them. They’re not the literary arts that the Dallas community supports. So, these kids don’t know where to go. This is why they go to New York and LA. We have good writers here; let’s promote these individuals and put them in the circles they deserve to be in. We need to make sure that they get just as much exposure as everyone else because that’s how you get the next Amanda Gorman. That’s why I’m fully invested. This is me being a voice for the voiceless and letting them know that you can be whatever you want to be in the literary arts. If you want to be a poet full time, I’m living proof that it can happen. That’s what this is about for me.

You can purchase Zantea’s book by clicking here.