AMPERSAND .09 – THE ART OF BEING ‘UNSTOPPABLE’

HomeAMPERSAND .09 – THE ART OF BEING ‘UNSTOPPABLE’

TACA recently hosted its first ‘Unstoppable’ event, giving 4 recipients of our Pop-Up Grant program the chance to sound off on artmaking during the pandemic and into our new future. We tapped arts writer Katy Lemieux to capture the story. 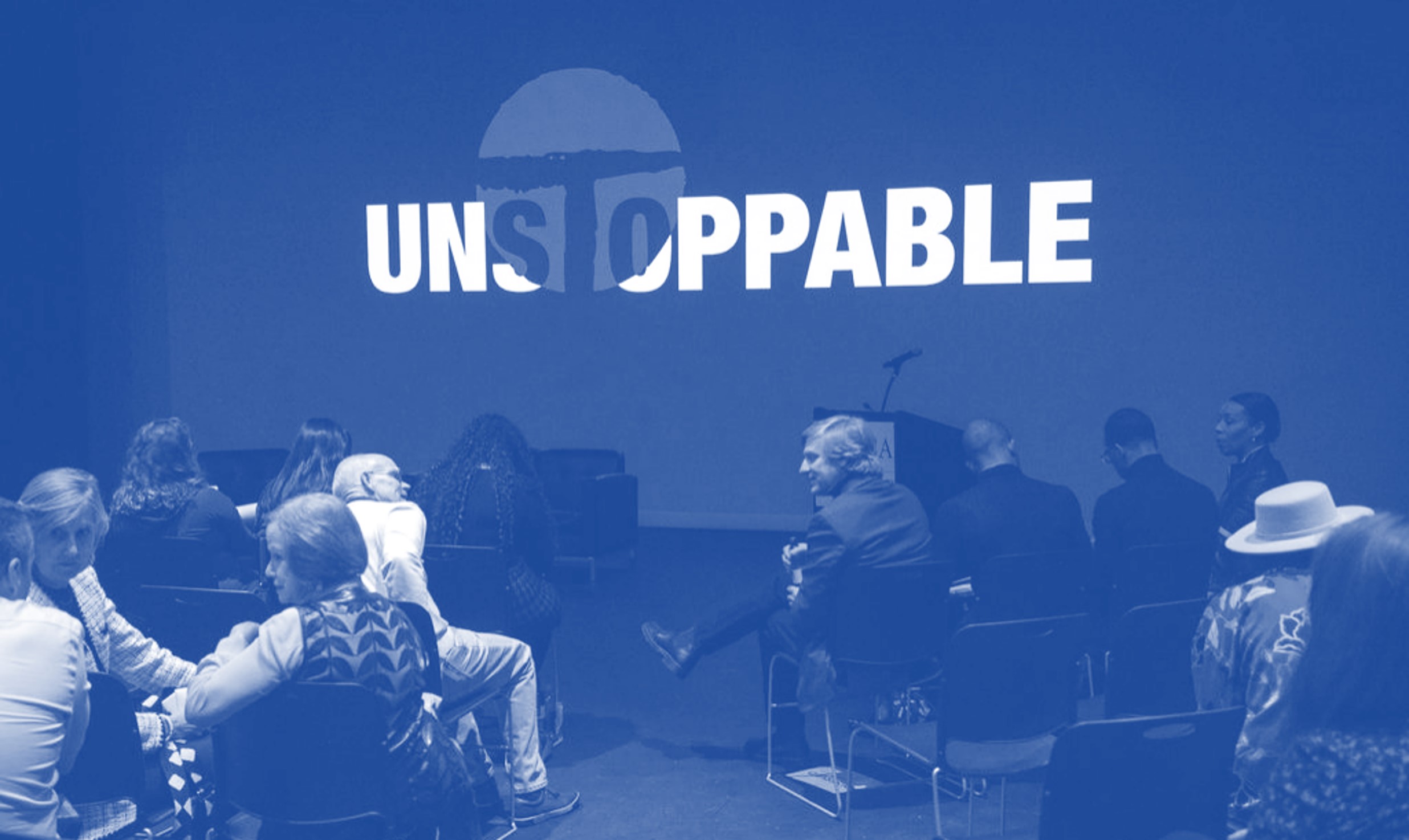 It’s hard to believe it’s been two years since life as we know it changed forever. What isn’t hard to believe are the ways Dallas creators have adapted, investigating the myriad opportunities art gives us to remember, dream, and feel things that were once thought to be lost.

We shall overcome because William Cullen Bryant is right;
“truth crushed to earth will rise again”.

Days before his murder, Dr. Martin Luther King Jr. echoed these famous words we shall overcome in his final 1968 sermon. Words that have been uttered into existence at every point in human history. Today, that uniquely human spirit that longs for something more than just existence, even as our weary bodies lurch forth ceaselessly into the uncertain future still remains.

Over time these words became a poem, a hymn, a protest song, and a rallying cry for the 1960s civil rights movement; and these words are truer today than they have ever been. A war-wracked earth in crisis, a tenuous future for our planet, and a pandemic that has halted us in our tracks. How do we go on? How do we overcome such sorrow when the future seems too bleak for dreams?

These words, “We shall overcome,” spoken by Dr. King provide the soundtrack to Dallas Black Dance Theatre’s “Bodies as a Site of Faith and Protest” a piece they premiered in 2018. Two years later they didn’t expect to be producing it again, much less as a film. But when the pandemic abruptly ended all performing arts, DBDT took a quick breath before springing into action, brainstorming how to adapt when people—audiences and dancers alike—could not gather in person. Spurred by country-wide protest DBDT’s 2018 work felt more relevant than ever. They got to work hashing out a plan to get the dancers back on their feet—and into the streets of Dallas—while adhering to strict COVID-19 safety guidelines. As Artistic Director Melissa Young says, “Artists are the group of people who make a situation work,” and she’s right; the best artists are the ones so fully present to themselves and to the situation that it demands a wholly authentic response.

With every visual and performing arts organization shuttered indefinitely, TACA began thinking of how they could support a city of artists in crisis—right away. North Texas’ nonprofit arts and culture industry region generates nearly $1.5 billion translating to 52,848 full-time equivalent jobs and generating $167.2 million in local and state government revenues. Just as DBDT scrambled to reorganize and invent something new out of crisis, TACA got to work raising money for one express purpose: keep these vital organizations afloat not only for the economic value but for our identity as a city.

TACA’s Board Chair Tara Lewis had a lightning bolt idea for “Pop-Up” grants, funding new works that were quick and digestible, just enough to come together over a few days. Kevin and Carol March took it further and pulled individual artists into this bucket for the first time in the company’s 55-year history, creating “Artist Bonus Funds,” allowing individual artists to receive funding. Here’s how it works: An anonymous group (30-50 people) of volunteers nominate artists and organizations that are worthy of investment through their innovation and perseverance. And so, a new funding program was borne out of something catastrophic looming and something monumental needed to meet it.

“Art makers are taking to the streets, storefronts, and parking garages of Dallas to bring art that matters to the people,” Terry Loftis announces to the packed crowd gathered at the inaugural “Unstoppable” event showcasing four Dallas Pop-Up recipients and held in the Latino Cultural Center’s sharply remodeled black box space.

The first thing TACA did with the Pop-Up Grants was to eliminate the application process. Poof. Gone. The overworked and underpaid grant writers and development officers will pledge unwavering loyalty to TACA for this gift. A simple nomination for a Pop-Up takes the place of a lengthy application process. Take a lesson, grantors: you, too, can make it this easy-to-get money to artists.

Cry Havoc Theater, the nationally acclaimed youth theatre, joined DBDT as one of the first companies to pivot to technology right away. Cry Havoc has had a close partnership with TACA during their eight years in Dallas and used their Pop-Up money for an immediate shift to alternative media for their plays. Cry Havoc’s Mara Richards Bim and the teens turned on a dime and set into motion a season focused on technology, purchasing sound equipment and recorders, and Fed-Exing the materials to the kids’ homes and coaching them on setting up mini recording studios in their bedrooms and closets. Cry Havoc also commissioned a composer for the first time, as well as a sound engineer to give the work the authentic, professional feel they craved to overcome the lack of a live audience. Forced to halt production on an upcoming play Dark Was the Night, Cold Was the Ground, they changed the project into the style of an early twentieth-century audio play directed by former Dallas director Ruben Carrazzana, exploring dystopia and future expectations about life on earth.

“We wrote it as an ensemble over Zoom and we discussed how civilizations become lost, and how we remember them,” Carrazana told KERA’s Art and Seek. “The result was a sci-fi radio play about a group of aliens who crash land on our planet in the year 4040, and then decide to create an audio documentary chronicling what they find when they get here.” Following the online streaming performance, Cry Havoc shared the audio play with assisted living facilities, particularly for residents with dementia.

While we mourned the loss of live events, we also lost the ability to connect directly with physical works of art. Out of necessity, even with shuttered galleries, the Nasher Sculpture Center launched “Nasher Windows,” a brilliant rescue that produced a series of street-facing exhibitions behind the museum’s front windows. One such window-front display by artist Kristen Cochran blazed in neon the words “Fare Well” in honor of the late Nasher store director, Donald Fowler, who died in 2020. Building on this success, and in homage to Fowler, came “Nasher Public,” a series of monthly exhibitions presented and open to the public in a new gallery space formerly occupied by the Nasher Store and in exhibitions out in communities. Each presenting work is by “emerging and established Texas-based artists,” and honors Nasher’s connection to the community, even when it’s behind glass. Like DBDT, they have made new connections to the Dallas community through their innovation.

The transformed store and window displays are another way the spirit of perseverance in art has abounded during the pandemic, and as it often does in times of crisis. The Nasher, like DBDT, Cry Havoc, and Cara Mia have all found ways to bring humans back together, in many varied forms.

When it came to keeping Dallas arts organizations from shuttering forever TACA did not close its coffers; rather, it poured money directly into the hands of artists through Pop-Up grants for innovative performances that could be executed safely during the pandemic, and for the first time in its history, no-strings-attached grants to individuals.

How many stories have we heard in the last two years that evidence the irreparable effect COVID has had on every part of the world? Often left out of this dialogue are the artists whose work can be perceived as non-essential. But when the world stops, all work that sustains us becomes essential, art is no exception.

In Dallas, this story unfolded exponentially. DFW boasts a reputation of both national and international regard for our impressive number of performing and visual arts institutions. And now the crux of the performing arts–being in person–has had to be reimagined.

Crisis breeds necessity and necessity gives rise to our most basic longing: community. Humans are, it turns out, meant to be together. Our fractured world shows the messy evidence of our primal, fervent desire for human connection, shared breath, the same blood pulsing through our veins urging us together. It’s an unreal feeling that we can be so intertwined with one another, sinew and arteries thriving for this very thing that can scarcely be named. It can never be destroyed. We shall overcome. Our bodies know the way.

Katy Lemieux is a writer living in Texas. Her work has been published in The New York Times, American Theatre, Texas Monthly, and Esquire. She is the former arts and culture correspondent for the Dallas Observer and has contributed coverage in myriad Dallas-Fort Worth publications. Winner of the Hugh Aynesworth Award for Texas Journalism given by the Press Club of Dallas.