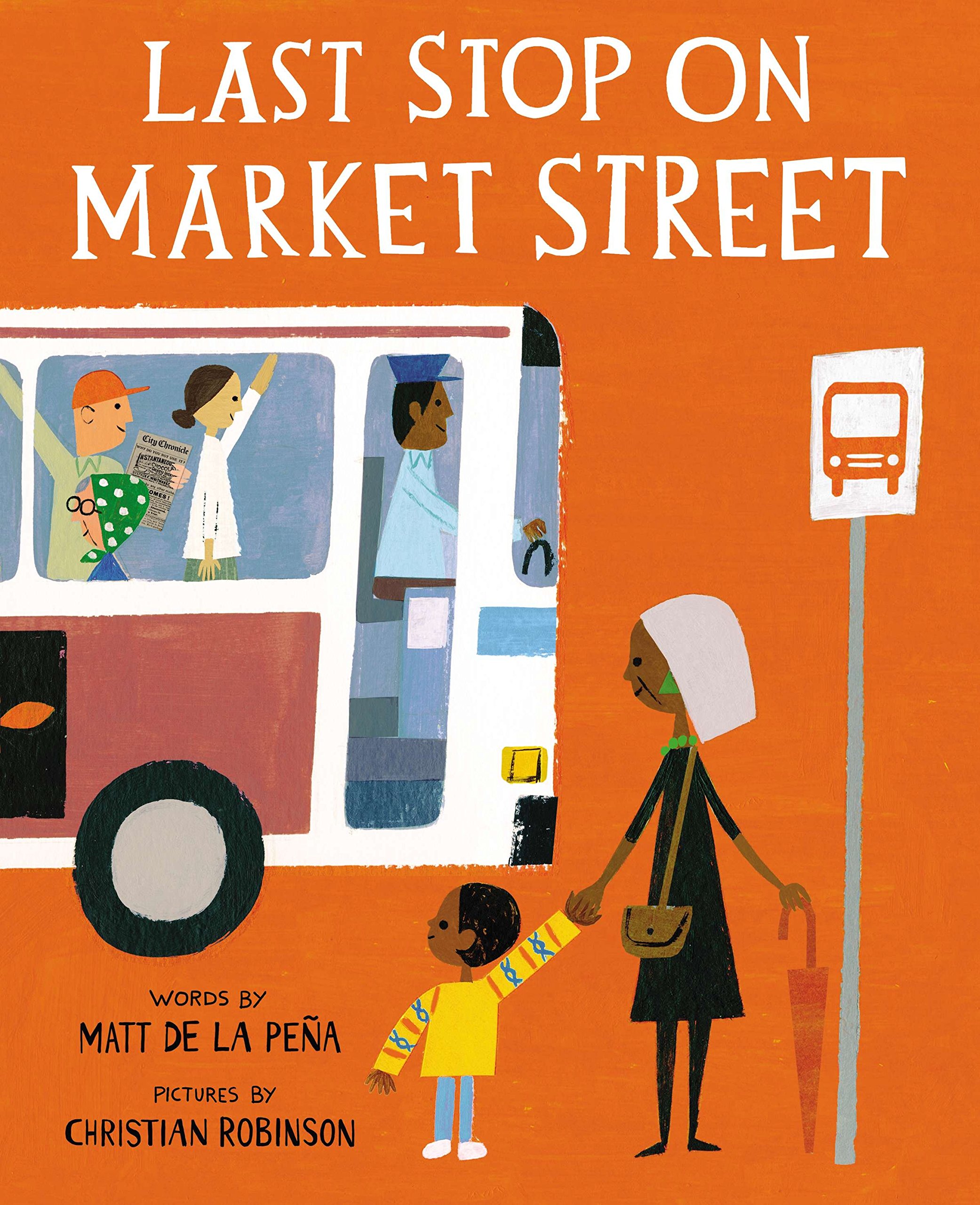 Dallas Children’s Theater (DCT) has an almost unparalleled history of creating new, meaningful works for young people and families. Their works about underrepresented cultures, teenage bullying, and other issues facing young people today have been received with enthusiasm and applause by audiences and critics.

Since its inception in 2012, the TACA New Works Fund has made it possible for more organizations to take risks and create original works with the potential for national and international impact. To date, the Fund has supported the creation of 28 new works of performing art in Dallas County, including DCT’s Skippyjon Jones (2014) and Yana Wana’s Legend of the Bluebonnet (2017), a collaboration between DCT and Cara Mía Theatre Company. In 2019, TACA awarded DCT its third grant from the TACA New Works Fund for Last Stop on Market Street.

The book, Last Stop on Market Street, written by Matt de la Peña and illustrated by Christian Robinson is the recipient of three illustrious literary awards:

The Randolph Caldecott Medal, awarded to the preceding year’s most distinguished American picture book for children

The Newbery Medal, awarded to the author of the most distinguished contribution to American literature for children

The Coretta Scott King Book Award, given annually to outstanding authors that demonstrate an appreciation of African American culture and universal human values

Haven’t read Last Stop on Market Street? Before you read on, listen to it here.

Despite the production’s postponement due to the coronavirus pandemic, we asked Last Stop on Market Street playwright Gloria Bond Clunie and director vickie washington to answer some questions about the story, their creative process bringing it to life on stage, and its meaning to them.

“Boy doesn’t know he got magic? Why, child – everybody’s got magic!”

How did Last Stop on Market Street get on your radar? What drew you to adapt the story into a play?

Gloria: The initial production was commissioned by the Children’s Theatre of Charlotte.  Market Street was the first play in a series of new TYA (Theatre for Young Audiences) plays in their Kindness Project.

Artistic Director Adam Burke sent me the book in 2017. Gracing an individual with a great book is an amazing act of kindness.   If that book is Last Stop on Market Street and has just won honors from the Caldecott, Newbery and Coretta Scott King Book Awards – this gift comes with triple rainbow magic!

I felt Matt de la Peña’s words and Christian Robinson’s illustrations created a moving story in a naturally diverse world.  I loved that in this simple, yet powerful book, a bus ride down Market Street prompted young CJ to marvel at his grandmother’s ability to see beauty in a less than perfect world. Also, the desire to spotlight kindness at a time when the country seemed to be experiencing a breakdown in civility was very appealing to me.

The clincher!  Near the end of the book, there are several buildings with graffiti sprawled across them.  One says, “One Love” and on the other is the name “Basil.”  Later, I learned Basil is the illustrator’s nephew.  Basil is also my husband’s name.  What can I say?  Magic!

How exactly do you take a story in a book and put it on stage? What’s the most difficult part in doing so?

Gloria: For a child, and the child who hopefully still lives in all of us — reading an exceptional picture book has its own special magic.  We instinctively feel every word is carefully chosen then skillfully married with images that delight, create wonder, and spark questions.

My charge? To honor these well-chosen words and illustrations as I lift their magic from the page to create a living, breathing world for the stage. As a playwright, the joy of resting in each word and devouring every picture – inspires new magic!

I will admit, there were challenges — joyous challenges — when taking this profound, but very simple, story from a 29-page, 754-word picture book to a 62 page, 12,000+ word script that had to fully engage 4 to 8-year-olds for an hour.

But rich stories, like Last Stop on Market Street, spark imagination!  Details hinted at in the book, became highly developed and very specific characters, scenes and moments of plot in the script.

For instance, in the book, the line “CJ pushed through the church doors…” inspired a full church scene, with an amazing choir and the critical “three eyes riddle.”  That riddle is not in the book—but CJ’s efforts to solve it now drives the entire play.   The picture of an old woman with butterflies in a jar spins into The Butterfly Lady – a war refugee who is taking butterflies to the park to set them free. A single illustration of a dragon on the side of the bus becomes a pivotal scene taking place in the amazing magical world of Mumford, The Bubble Blowing Dragon.

All of these characters support CJ in discovering the world, and himself, in powerful new ways. These characters must support him, but don’t act for him.   A great main character in a children’s play is a child who has agency.

Since CJ is the only significant child surrounded by a host of adults in the book, I had to make sure he had the power to take action . . . to change his world.  Rather than having an adult tell him what to do, he had to face conflict and make choices which helped him understand, grow and change.   As the main character makes discoveries, children in the audience discover their power, their agency, and their ability to take actions that help them understand and change their own world.

The play originally premiered at the Children’s Theatre of Charlotte in 2018 – how has the play developed since that production?

Gloria: In Last Stop on Market Street Mumford the Dragon says, “It’s the stops along the way that make our day!”

Developing a new play is a journey.  Dallas Children’s Theater was an amazing stop!   Actually, DCT was the final stop in a “rolling premiere” designed to create an important new TYA play.

Keep in mind; our work was fueled by knowledge gained in Charlotte’s excellent first production.  Fueled by a wonderful five-character version we explored several months before at Bay Area Children’s Theatre. Still, I had 24 yellow post-it notes!  Because of TACA and DCT, twenty-four opportunities to make a strong play – even better!  Better for the most important audience that exists – children!

Artistic Director Robyn Flatt, the DCT staff, the cast of talented actors and designers helmed by great director vickie washington all had a keen understanding of the delicate new play process.  Like me, they came at the work with fresh eyes and a willingness to play that resulted in tremendous growth.

Steven Taylor composed completely new music for all of the songs and developed a new soundscape to define each setting.  We discovered how an actor who didn’t play guitar could perform Guitarman.  This meant a great deal of flexibility for later productions.  I’m thrilled, the “Red Car, Blue Car” scene which was cut before the Charlotte production is now back in the show!  Dallas audiences will be the first to see this exciting new scene.  The current set design helped me to reimagine stage directions which will make future productions much smoother.   Rebuilding the transition from CJ’s real world to the magical world of his imagination makes a critical point in the play much clearer. Coupled with the previous productions, DCT’s exploration also confirmed what truly worked in the script – which is a great feeling before sending a play out into the world.  All this – plus resolving 24 post-it notes!

Though Market Street could not be performed because of the current national health crisis, excellent work was done. TACA’s support of Dallas Children’s Theater and their commitment to bring me to DCT not only developed a new work which will be shared with Dallas children in a future season, but sets a stellar nationwide example for best practices in developing new work for children.

vickie: In December of 2018, Robyn Flatt reached out and asked if I would be interested in directing this adaptation. Having known Robyn for many years, and moreover having appreciated and enjoyed the work of DCT down through the years, the invitation to direct Last Stop on Market Street was one I quickly accepted.

Additionally, there were many other factors that drew me to this project. As a mother and now a grandmother, I have always been very deliberate in seeking out and finding children’s books that center/feature the lives and stories of girls and boys of color. Last Stop on Market Street is a beautiful storybook telling the story of a grandmother, Nana, and her grandchild, CJ and their Sunday afternoon bus ride on the way to serve at a soup kitchen. Gloria Bond Clunie has taken the beauty, color, and rhythm of this book and has layered in magic, music, and infectious joy! The opportunity to be a part of bringing this story to the stage was not to be missed.

Anecotally, I knew that I had made the right choice when I took my three grandchildren to see the DCT production of Diary of a Worm, Spider, Fly. During the curtain speech, it was announced that Last Stop …would be in the 2019-2020 season and my 9-year-old granddaughter’s eyes got wide with delight as she proclaimed “That’s my favorite book, ever!”

Why is this story important?

vickie: Last Stop on Market Street does what great stories do…it takes us on a journey, and provides opportunities for growth. Through the eyes of 7-year-old CJ, and the wisdom of his Nana, we get to take a ride down Market Street, a journey in and of itself. While riding we meet delightful and interesting characters, each with their own stories to tell; their own journeys to share. In the sharing and telling of these stories, I asked the cast to join me in embracing the themes of witness, kindness, service and magic. Throughout the play these are continually explored and exhibited. In the Butterfly-Lady’s recounting of her journey to freedom, CJ learns of the kindnesses afforded to her and her family. While waiting for the bus, he witnesses a woman driven by her hunger to eating from a trash can. On the bus, the Guitarman helps CJ find his very own song, opening the doorway to a magical world, and finally while helping Nana in the soup kitchen, CJ learns the value of service. These are just a few examples of how these four themes are illustrated throughout the play. Through a bus ride with Nana and CJ, we learn that taking the time to witness – to truly see others; to serve each other- especially at our point of need; to be kind and helpful; and to always make time for magic, these will help us to face our fears, and truly see the beauty in ourselves and in all people.

Why are new works of art important?

vickie: If history teaches us anything at all, it teaches the importance of change, growth, and expansion. As a theatre artist/practitioner for many years (decades actually!), I am deeply appreciative of my roots in the theatre AND my wings! New works of art, specifically theatre are vitally important to the continued growth and expansion of our art form. In my journey I have had the good fortune to work as a theatre educator for many years at the same time as my professional practice. New works are the life blood of the theatre! We have many, many stories yet to be told, and audiences waiting to experience those stories. Throughout history, new generations have come forward to tell their stories. These have helped to push the theatre ever forward; and to make it more open and more inclusive.

The 2019 TACA New Works Fund was made possible by generous support from the Donna Wilhelm Family Fund, the Hersh Foundation and the Sapphire Foundation.